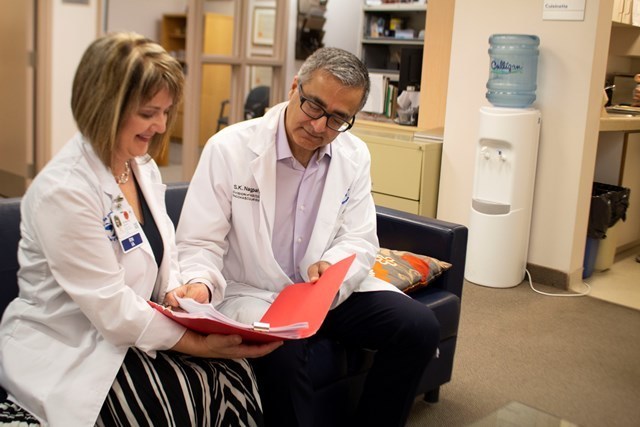 The Ottawa Hospital has been using how2trak technology for over a year now. The expert LPC team in combination with our robust how2trak software is dramatically improving patient outcomes.

This article was written by Caitlin Renneson and was originally published by HospitalNews.com on October 29th, 2019 here.

For many people, a cracked callus is nothing more than a nuisance. But as a person with diabetes, Debora LePage knew that the one she saw on her left foot could be cause for concern. Debora decided to go to the Emergency Department at the Cornwall Community Hospital.  An infection developed, and Debora was transferred to The Ottawa Hospital.

The infection become so advanced that doctors had to amputate two of Debora’s toes.

After the amputation, Chris Murphy Ph.D. and a nurse specialist at The Ottawa Hospital’s Limb Preservation Clinic (LPC) visited Debora to talk about how they might be able to speed up the healing process.

Murphy works closely with other care providers at The Ottawa Hospital and in the surrounding community to care for nearly 1,500 patients per year who have conditions affecting the blood flow to their leg or foot.

The LPC is a leader in Canada. It began several years ago as a pilot project that informally brought together care providers from The Ottawa Hospital with expertise in lower-body wounds. It has since expanded to include experts in vascular surgery, plastic surgery, infection prevention and control, orthopedics, chiropody and more.  The model of care means that patients can access the experts they need without long delays.

One of those vascular surgeons is Dr. Sudhir Nagpal.  He sees great benefits to how the LPC is designed.

“We’re all so close together, and we can’t underestimate how important that is,” he says.  “It really improves patient care.”

That team approach resonated with Debora. It wasn’t long before she started to notice how the teamwork among the experts at the LPC helped her foot get better, faster.

“The clinic was connected perfectly,” Debora recalled.  “It was great.  Anybody that dealt with me knew what was going on.”

The fact that everyone in Debora’s care team was working so closely together had practical advantages, too. As a resident of Cornwall, Debora appreciated that her LPC appointments were scheduled for the same day. It saved her from having to make several trips to Ottawa in a week.

“The graph lets us see if things are plateauing, or getting worse, and in that case, I can go across the hall and speak to a vascular surgeon about it, and it’s acted on immediately,“ explained Murphy.

As the wound healed, Debora continued receiving care from nurses in her community who themselves got support and guidance from the LPC.

“The LPC is not just about patient care, although that is the primary focus,” says Dr. Nagpal.  “We also educate community and primary nurses, publish papers and set up courses for physicians.  The result is world-class wound management, vascular management and research.”

For Murphy, the care lasts for as long as the patient needs it.

“I tell each patient that their care comes with a lifetime warranty,” Murphy explained. “Once the wound closes, if they have a small issue with it, we can respond to it quickly before it becomes a bigger issue.”

Debora has since had to go back to the LPC for an issue in her other leg, but she did so with confidence.

“It was fabulous care,” says Debora. “I felt that any concerns that I had were being taken seriously. They answered all of my questions, and I knew that I could call them at any time. Even though I was so far away form home, I felt like I was in the right place. I had no worries at all.”

Caitlin Renneson is the Publications Officer at The Ottawa Hospital.